A few months ago, I posted about a mallet I had made from a chunk of apple wood donated to me by a friend. Well, since then the head has unfortunately developed a couple of rather large radial shakes. I am wondering if perhaps it wasn’t dried out enough before I shaped it, but there’s nothing to be done about it now. I had toyed with the idea of using some kind of epoxy to fill in the shakes but I’m not sure how useful this would be. The shakes don’t seem to be getting any bigger and the head seems to be holding together in spite of them. I’m not sure if I really need to do anything – perhaps it is just cosmetic. I’d welcome some advice if any of you have experienced this kind of thing. 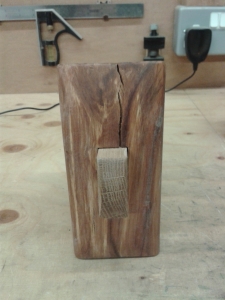 Anyway, since I like making mallets, and since my friend also gave me a large chunk of ash at the same time as the apple (some acacia/myrtle too as it happens), I thought I’d make a backup mallet in case the apple one fails on me. 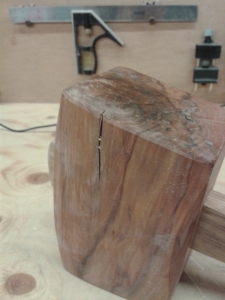 It is slightly bigger than the apple one, and the handle is also made of ash (I think it is ash – it looks like ash, but I’ve not seen dark grain like that on ash before) and I’m quite pleased with the result. It did have some difficult grain to work though, it kept switching direction as I was planing it, making it difficult to get a decent finish. Whilst I’m not usually a big fan of compromise, in the end I had to remind myself that this was essentially a tool for hitting things with, and so a perfect finish was no necessarily something to spend too much time on. I branded the head and handle with my mark and then finished them with three coats of my homemade oil/varnish blend.

I haven’t had time to post much lately. I’ve been quite busy with other things, and if any of you follow my twitter feed you’ll have noticed that I’ve been on holiday in France and Belgium recently. I want to do a post soon about a place I visited in France during the second half of the holiday. Unfortunately it is only slightly related to woodworking, but it is at least enormously related to unplugged craftsmanship. I’ll say no more for now. Watch this space…

2 thoughts on “A backup mallet”