Last month, Goatgirl and I took the kids on a camping holiday in France in our recently purchased motorhome. Starting in St. Malo from the ferry, we travelled across Northern France taking in Mont-Saint-Michel, Bayeux and Rouen before meeting up with my parents, my brother and his girlfriend in Maubeuge. From there we drove in convoy across the border into Belgium for the Formula One Grand Prix in Spa. That was an amazing four days, even in spite of McLaren’s poor performance. I hadn’t been to a Grand Prix for over 20 years, and it was a first for Goatgirl and the kids. A good time was had by all.

The day after the race we went our separate ways; my brother and his girlfriend headed home, my parents went on into Germany, and we went south back into France, travelling for another week in a loop that took us south of Paris and then west, back across to St. Malo. Midway through this return journey we had a scheduled stop in Treigny to experience something truly awesome – Guédelon Castle.
Bearing in mind that we had just gone to a Grand Prix, this was by far the highlight of the trip for me, and although the other three might not say the same they nevertheless had a great time as well.

Guédelon Castle is a construction project that began in 1997 and will probably take another ten years to complete. It is a medieval castle that is being built using only 13th-century techniques. All of the workers wear period clothes* and only use the materials and technology that would have been available in the 13th-century. Most of the materials are obtained on site – wood is taken from the surrounding forest, rock is quarried from just outside the castle walls, and all the sand and lime for the mortar is found nearby. Clay for pots and roof tiles, dye for fabric and paints, and even rope for winches and cranes are all found or produced in dedicated workshops dotted around the grounds. There is even a working watermill five minute’s walk away from the castle. 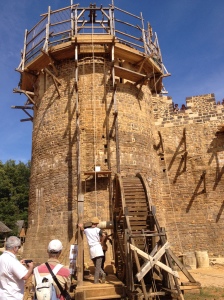 Among the dedicated workshops are a rope walk, a blacksmith, several places to mix mortar, a couple of carpenters workshops, stone dressing workshops and a dye making workshop. The carpenters work away with draw-knives, axes, froes and mallets; the blacksmiths beat away at red-hot pieces of metal, straight from a furnace fed by huge bellows, producing thousands of nails. These materials are used mainly for the wooden scaffolding and giant “hamster-wheel” cranes that cling to the various towers. All of this is going on while the visitors move among the workers, who seem only to happy to stop and answer questions.

The workers, in many cases, are master crafts men and women, but there are also a number of unskilled labourers working on the site. Apparently the project has created 50 jobs and there are hundreds of volunteers helping out with the construction. Many of the workers are young people who are facing difficulties of one sort or another and the project is a chance for them to receive professional training and work experience.

The castle is also a tourist destination, with more than 300,000 visitors each year. All of the worker’s wages comes solely from ticket sales and so the project is largely self-funding. It really is an amazing project. 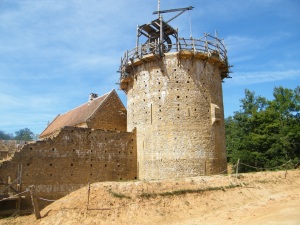 As I said, the aim of the project (experiment, really) is to try and create a medieval castle, from scratch, using ony period techniques and technology. Having said that, I did notice a couple of anachronisms. The first was a power cable leading up one of the towers. On reflection, I am pretty certain that this was for lighting, and not for any kind of equipment. I also noticed that in a couple of places the wooden scaffolding was held together with modern looking steel fixings. 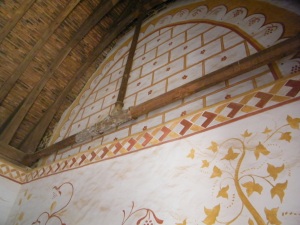 However, this seemed to be only in places where a quick repair job had been needed. I also noticed that in certain areas, such as in and around the crane wheels, the workers were wearing *hard-hats, albeit covered in leather. I am sure all of these things are health and safety requirements and, for me at least, they don’t detract from the spirit of the project. Safety of the workers, not to mention the visitors, has to come first – there are limits to authenticity after all.

Last year, the BBC ran a five-part series about Guédelon called Secrets of the Castle. It follows two archaeologists and an historian, over a six month period, as they live and work among the workers on the project. Last time I looked, the episodes were available on youtube and iplayer, and they are well worth a viewing if this kind of thing interests you. 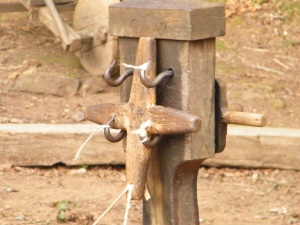 All in all, we were on site for over five hours, and it was 35ºC (95ºF), which was plenty hot for the likes of me! Even so, it was by far the best part of the holiday for me, and I can’t wait to go back in a few years to see how it is progressing.