Sometimes, you find yourself with a piece of wood that is just too damn thick for what you need it for. You might have a nice plank of walnut, say, or maple, that is just over 2″ thick, but what you really need is two planks, each about 1″ thick. Or, maybe you just need a plank that is ½” or ¾” thick. What are going to do?

Well, if you have 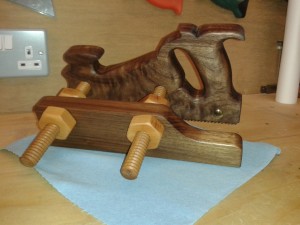 the space and the money, you might just run over to your bandsaw and rip the sucker apart. Job done. If, like me, you haven’t got that luxury, you might want to acquaint yourself the work of Tom Fidgen, a Canadian woodworker who has come up with a nice unplugged way of resawing timber.

I’ve already mentioned Paul Sellers, the maestro, who is one of my go to guys when I have a woodworking problem to solve. Well, Tom Fidgen is another. He has written a couple of books, Made by Hand and The Unplugged Woodshop, which I highly recommend. It is in the second of these books that he showcases his resawing solution, and he also goes through their construction in a series of YouTube videos. 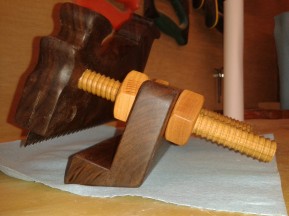 The first part of his solution involves a tool he has invented which he calls a Kerfing Plane. It is sort of a cross between a stair saw and plough plane. There are two versions of the plane, one with a fixed fence for ripping thin 1/8″ veneer from larger stock, and an adjustable fence version, which is the one I have built.

The second part of his solution is a Frame Saw – a wide saw plate, with a rip cut pattern, pulled tight inside a horizontal frame. 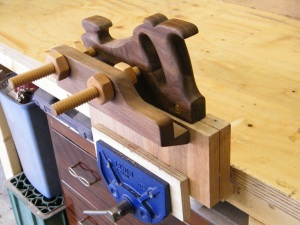 The idea is that by adjusting the distance between the fence and the saw plate, you can use the Kerfing Plane create a saw kerf around the perimeter of your plank of wood, and then use the frame saw to rip the board in two. The kerf created by the plane means that the plate of the Frame Saw follows the path of least resistance and doesn’t drift, something that is prone to happen by just using a panel saw to resaw timber. This video is a demonstration of Tom using the Frame Saw. 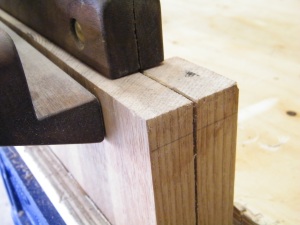 Tom suggests using particular saw plates for both tools, obtainable from a friend of his. Sadly, those plates were a little out of my price range, so I improvised by upcycling an old tenon saw plate for the Kerfing Plane and for the frame saw I found an inexpensive plate from Dieter Schmid – Fine Tools. 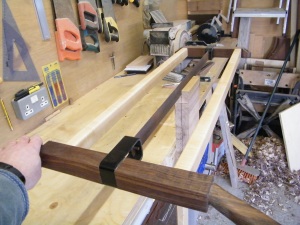 The body of my Kerfing Plane is made from walnut, and I used cherry for the ‘nuts’ and ‘bolts’. I made the threads using a ¾” wood tap and die. The brass saw nuts are from Workshop Heaven.

My frame saw is made from walnut and maple. I procured a small piece of box section from a local hardware store for the tensioning mechanism, cut it in half and sprayed the two pieces black. 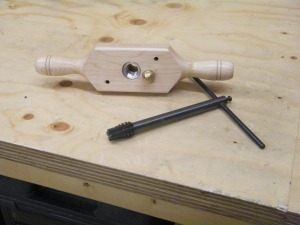 I was so pleased with how useful these tools are, that I contacted Tom Fidgen and sent him some pictures. Amazingly, he posted them on his website, The Unplugged Woodshop. 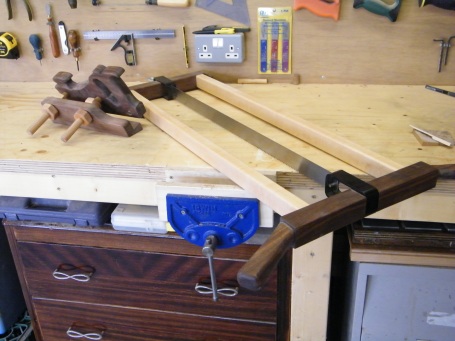 I have used both tools an awful lot, for resawing the offcuts I got from the timber mill, and I am very pleased with the results. The next few posts will feature other tool making projects I have since undertaken, and all of them required the use of these two indispensable tools somewhere along the way.

4 thoughts on “Resawing by hand”