I was watching one of Tom Fidgen‘s videos a few weeks ago, and he was using what looked like a wooden coping saw – a small bow saw, with a very thin blade. I was intrigued by it, so I did a bit of research and ascertained that it was what is called a Turning Saw.

There are several instructional videos and articles online on how to make one of these saws, and I thought I’d have a crack at one.

A bow saw is simply a blade set in the bottom of a wooden ‘H’ frame, two cheeks and a horizontal stretcher, and tensioned by a length of string at the top of the frame. The tensioning is done by a wooden toggle, that twists the string to the required tension and held in place by the frame.

I had a piece of 1½” ash left over from another project. Ash is a good choice for this kind of project as it bends well without breaking.

I found a design that I liked from Gramercy Tools and went to work dimensioning the three main components of the frame. 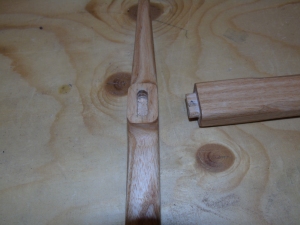 The cheeks join the stretcher at either end with small mortise and tenon joints – no glue, just a snug friction fit. The tenons are about 1/8″ shorter than the mortise holes to allow for movement when tensioning. Also, two holes needed to be bored, one in each cheek, to take the handles and brass pins that hold the blade.

With the joints all done, is was time to shape the frame, removing as much material a possible to minimise weight, while retaining just enough to ensure strength. I used the plans to draw a template  for the cheeks, overlaying onto the ash blanks and scribing a line around it. Then using a coping saw, chisels, a spokeshave, rasps and files, I was able to shape each cheek. The stretcher too was shaped by chamfering the edges.

Next came the handles and toggle. I decided to make these out of walnut, which contrasts well with the pales ash. However, they needed to be turned and, as I have posted, I am without lathe. It was at this stage that I took time out from the Turning Saw project and turned my attention to the turning machine project featured in my last post.

With that travesty of a machine built, I was able to make a reasonable pair of handles, one large handle for the heel of the saw, and another smaller one for the toe. I made the toggle at the same time, then chamfered and shaped it with a smoothing plane and a rasp.

Next came the blade and the brass hardware. Dieter Schmid – Fine Tools sell kits for this Gramercy bow saw, but they also sell some of the components individually. I was able to buy some blades from them as well as the two brass pins. The brass pins are epoxied into the handles and then passed through the frame, in a dry fit, to attach onto the blade.

Finally, I used a length of hemp cord to tension the saw. Once assembled and tested I knocked it apart and gave all the wood my usual treatment of oil and wax.

I’m quite pleased with the results. Even if the handles are a bit rough and ready, the saw itself works a treat. In due course I might look into making a larger bow saw with a wider blade, but that won’t be for a little while.