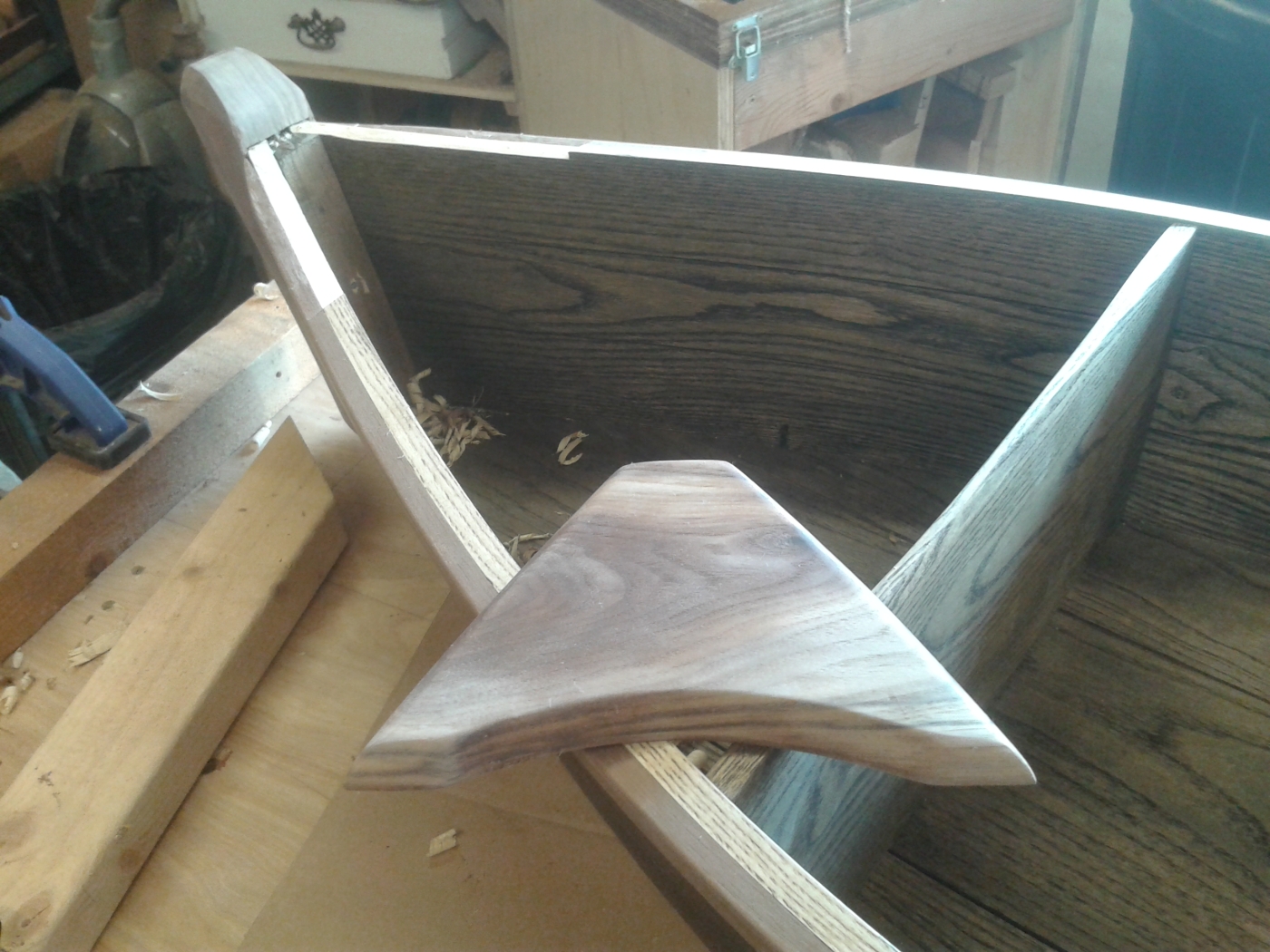 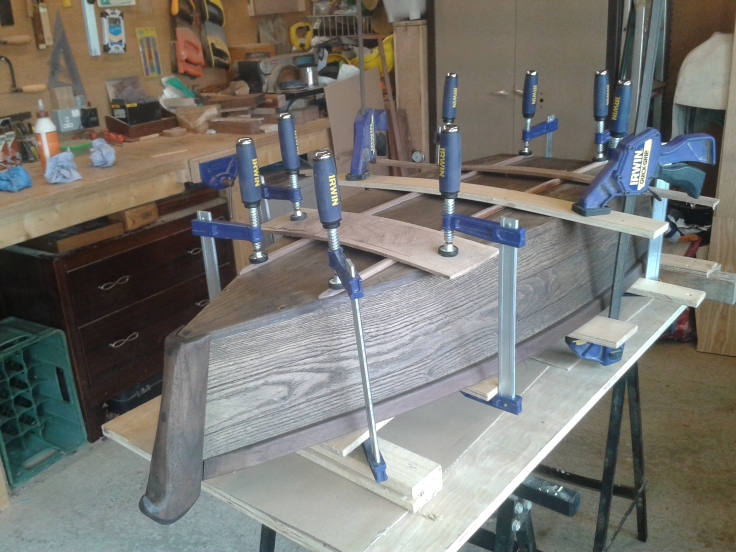 With the main structure of the bookcase assembled it was time to work on some additional features to make it look a bit more ‘boaty’. I decided to use walnut for this, and I began by making a stem to define the bow  I started by chiseling out a ‘v’ shaped stopped dado into a piece of walnut so that the stem could fit onto the bow and hide the screws that hold the sides together.

Next, I made a template from thin ply and transferred it onto the billet and cut out the rough shape with a coping saw. I finished the shape with chisels, planes, and a spokeshave, before tidying up with a rasp and file and sanding smooth. The stem was attached with through dowels and glue.

Then, I moved onto the two rails that would thicken the forward edges. I cut them from a ½” plank of walnut, dimensioned them with a marking gauge and hand plane and tapered them at the leading so that they would be flush with the stem. I also made a rail for the transom(*) and two feet for the base. After I had rounded the edges a little I sanded them smooth and fired up the steamer once more.

After my last post, a commenter asked me for some do’s and dont’s regarding the steaming process, so I may as well do that here. First of all, my set-up seems to work just fine, so I can recommend the wallpaper stripper method for small infrequent projects like this. However, if one was to find oneself doing more projects like this, acquiring larger more powerful system might be worthwhile.

I have read somewhere that the steaming process is more effective if conducted at high pressure, and obviously that is not possible with my steam box, which is just a simple ply construction with an inlet for the steamer, an outlet for the steam, a meat thermometer to monitor the temperature, and a door. That being said, I have seen videos of boat builders steaming wood in situ, with the wood inside a polythene wrap, with a hole in one end for the steam to enter and another at the other end for it to escape, so perhaps high pressure isn’t all that important.

I will say that I found that the temperature didn’t quite get up to 100ºC unless I blocked some of the outlet holes. I had drilled three of them, but one would probably be enough. The main piece of advice to give is that it is very important to work quickly once the wood is removed from the steamer. The temperature drops off very quickly so make sure that you have everything ready for the bend before you open that door. Oh, and wear suitable gloves as the wood will obviously be hot – boiling in fact. Other than that I don’t know what else to say, except that this method seems to work quite well.

Anyway, back to the build. Once the steamer was up to temperature (around 100ºC or 212ºF) I quickly put the two rails inside, shut the door on them, and left them alone for upwards of an hour. Instead of bending them into a form, as I did with the sides,  I decided to glue and clamp them straight onto the boat so just before I got them out of the steamer I applied some glue to the sides of the boat. I clamped them one at a time, leaving the second rail in the steamer while I clamped the first in place so as to maintain the temperature. While the glue was drying I fitted the transom rail and feet and cut the rails flush.

…and some strakes for the bottom of the hull.

I have to admit that the strakes were a bit of an afterthought. Rather foolishly I had not accounted for the fact that the wood would shrink after being steamed, and there were small but noticeable gaps between the planks that form the hull that you could see daylight through. The addition of the strakes remedied that, as well as adding some welcome ‘boatiness’ to the project. I did not bother to steam them, I just glued and clamped them in place.

Well, that’s it for another week. I’d say one more post and this one will be in the bag.

*Apologies if my terminology is a bit off. I am not a nautical aficionado.

One thought on “Boat Bookcase #3: Smartening up”