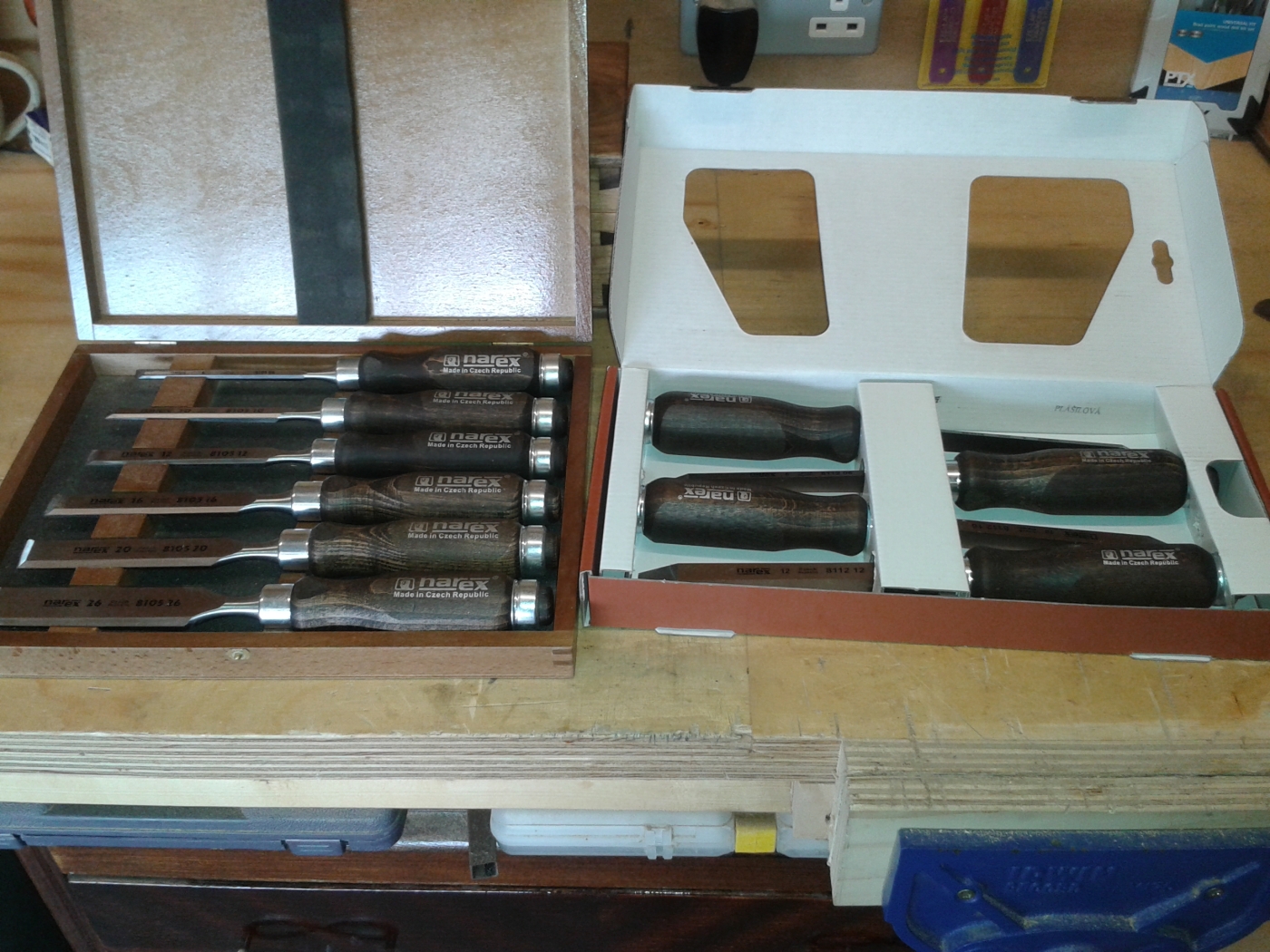 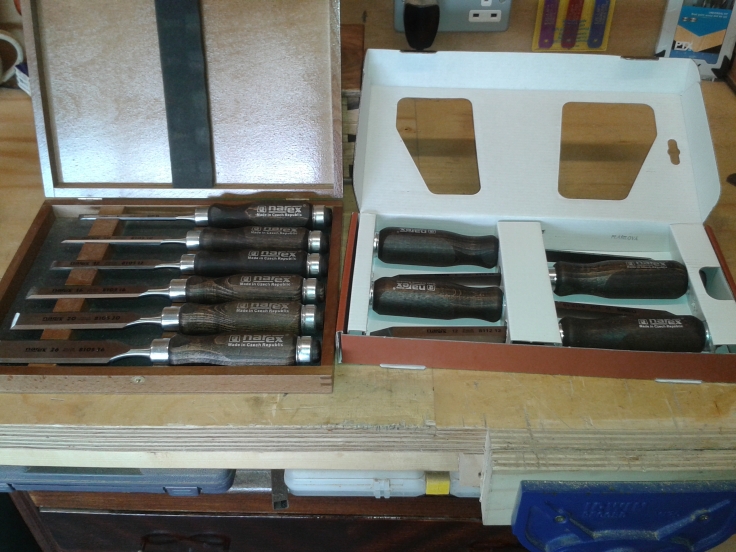 Last year, for dad’s day, my kids very kindly got me a set of Narex bench chisels. Now, I know that they are not high-end chisels, and many a woodworker would probably scoff at them because they aren’t Lie-Nielson or Ashley Isles and didn’t cost the equivalent of the GNP of Ecuador, but for my needs they are perfect. They fit my hands well, they are nicely balanced and they hold an edge well. Also, as a bonus, they came in a nice little box which protects them from surface rust. 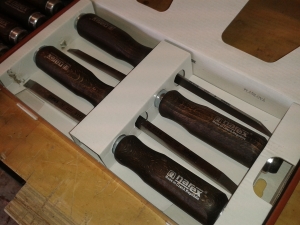 This year, when my kids asked me what I wanted for dad’s day, I had no hesitation in pointing them in the direction of a nice little set of mortise chisels, also from Narex. It is true that I haven’t really missed not having any up until now and I know that some woodworkers don’t bother with mortise chisels – they maintain that a good bench chisel is just as good for chopping out a mortise hole. However, efficiently cutting a good mortise joint is something that I will want to do more of in the future, and bench chisels seem a bit too flimsy to me – I’d hate to snap one. 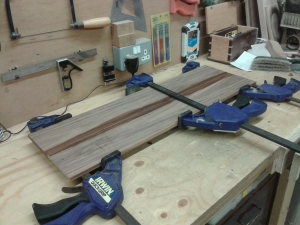 Anyway, all this throat clearing brings me to the topic of this post, because when they arrived, my nice new mortise chisels were naked! They had no box to sleep in. This will never do thought I, and so this last week I set about remedying the situation. 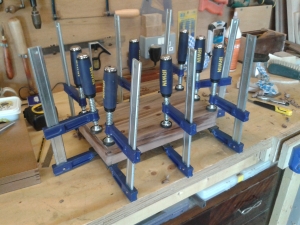 For the box itself I used up some thin walnut stock, but it was not quite wide enough so for the lid and base so I had to laminate two pieces together. The apparent strength of this glue joint always amazes me.

I used dovetail joinery (again!) and brass hinges and screws for the lid. The catch is the same type I used for my dowel box. I also made two notched racks for the four chisels to sit in, one rounded for the handle ferrules, and one squared for the  blades. The latter was notched with different widths for the different sizes of chisel.

The box that my bench chisels came in has a soft liner in the base and foam strip in the lid to stop the chisels from moving when the box is closed. I wanted to try and replicate this as much as possible and so I fell back on a habit of mine that has, in the past, caused more than a little marital strife. Now, I wouldn’t exactly call myself a hoarder, but I do have a tendency to hang onto seemingly useless things in case they are needed for future projects, and this tendency does make me the butt of a few jokes from goatgirl. However, what causes the marital strife is when I am well and truly vindicated, and the true gift of my prescience is made delightfully apparent. This is what happened in this case.

I masked off the areas where the liners and foam strip would adhere to, and applied three coasts of shellac and some finishing wax. For the liner I used some small offcuts of self-adhesive underlay left over from when I put down a wooden floor in the hallway. For the foam strip I found the protective packaging that my set of Sabatier kitchen knives came in, that I thought looked useful and set aside in case I might need them one day. Ahh, being right – it happens so seldomly, I’d almost forgotten how good it feels! I believe the last time it happened was during the Clinton administration. 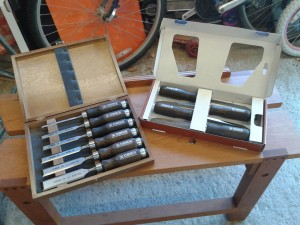 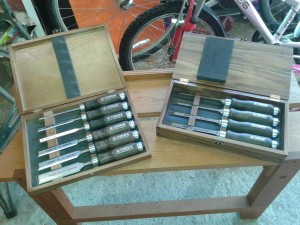 I am very pleased indeed with my new chisel box and as you can see from the before and after shots, it is a much more suitable packaging solution than the cardboard travesty they arrived in. I am however left with one problem, and I will need your advice on this one. I think I’ll leave it for a future post though. Some people might not make it all the way to end of this one and I need to reach as many of you as possible. I’ll be back in a couple of days. 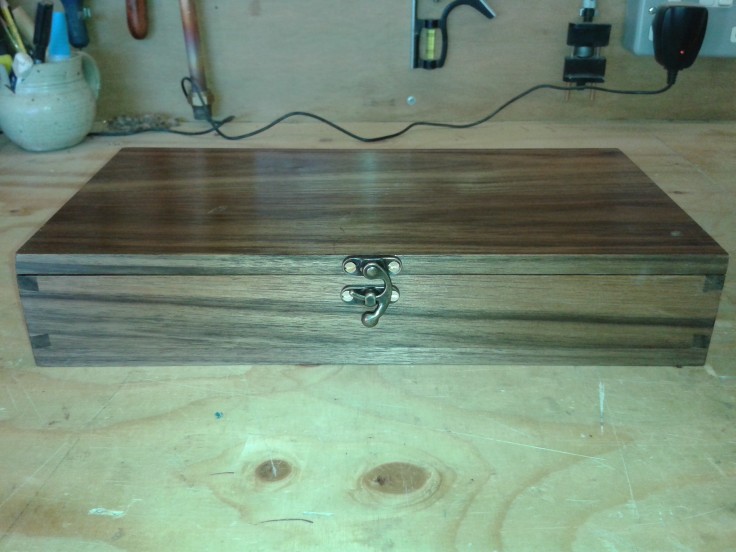 4 thoughts on “Yet another box”