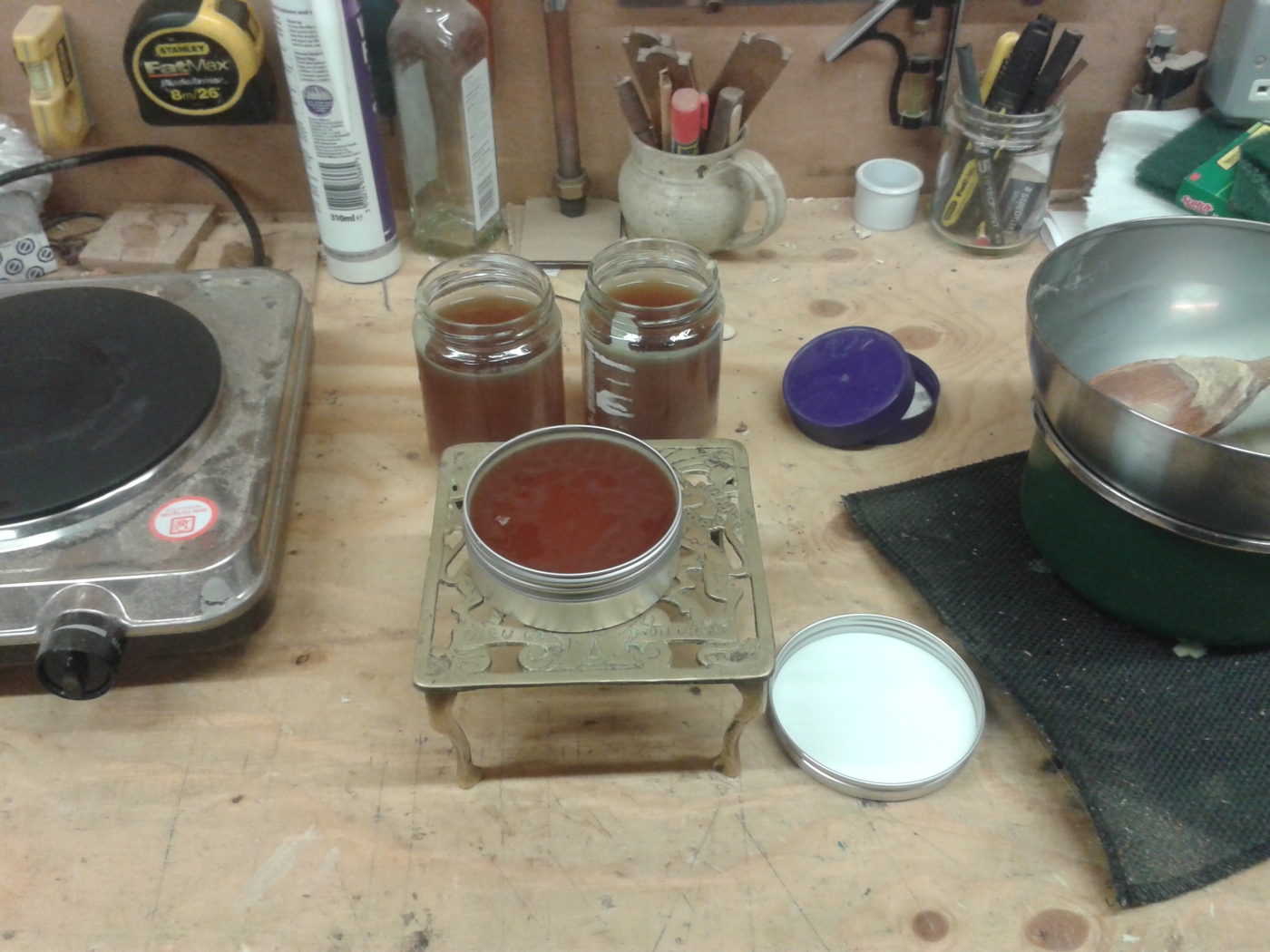 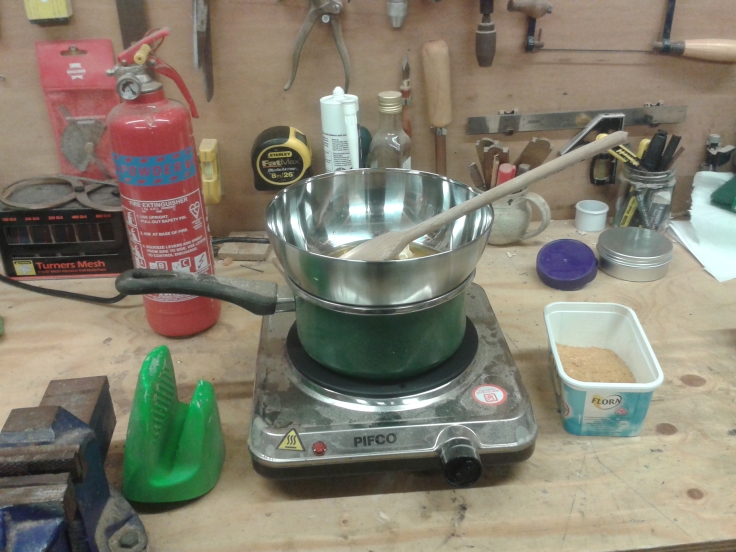 This is a bit of a sidetrack from the Workbench Project but fret not; it will bring us back on topic before this post is done.

A little while ago, while working on another project, I mentioned that I had been playing around with some homemade finishes, and that I would post about it later. Well, its later now.

In the past I have played around with oil/wax blends, specifically linseed oil and beeswax for my sawyer’s bench, and walnut oil and beeswax for a turned fruit bowl. I also made an oil/poly blend for my funeral chair. This blend was thinned with mineral spirits.

When I was building the boat bookcase I decided to mix up some oil/poly but this time it was thinned with turps, to a 1:1:1 ratio. I also found some wax polish recipes online, which consisted of beeswax, carnauba wax, turps and mineral spirits, in varying quantities and combinations. I whipped up a batch of each of the three recipes for soft, medium and hard wax polish, and I believe I used the medium to finish the bookcase. 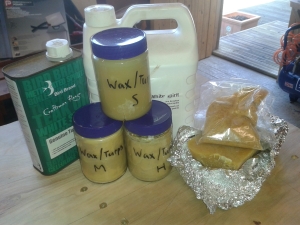 The wax polish recipes are taken from an online article from a chap called Derek Jones at woodworkersinstitute.com. I already had most of the ingredients – I just needed to get some carnauba wax, which I think I found on Amazon.co.uk.

Melting the wax in a double boiler, and measuring out the rest of the ingredients in glass jars, I had enough polish to fill a small jar and an aluminium pot for each of three types. 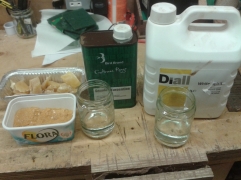 Around this time I also mixed some thinned down cellulose sanding sealer (sanding sealer and thinners 1:1) and O.B’s shine juice (shellac, denatured alcohol and boiled linseed oil 1:1:1) for turning finishes…

…so I was left with quite a little apothecary by the time I’d finished. 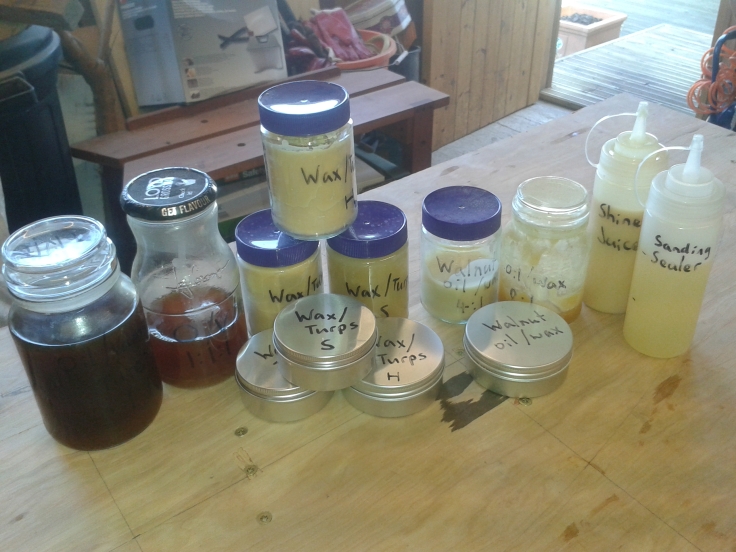 What has all this got to do with the Workbench Project I hear you ask? Well, not much really, except that I once again have been in the ‘kitchen’ mixing up a suitable finish for the bench.

No wax this time, just an oil/poly blend, 1½ parts boiled linseed oil, 1 part poly and 1½ parts turps. I decided to ease back on the poly because I didn’t want this finish to be too shiny. I envisage having to reapply it every now and again anyway, so durability isn’t really the point.

Three coats, ragged on, one day apart, and I was ready to move onto the next stage.

Actually, we’re almost up to date now. I’ve added some other features since, but news of that will have to wait a longish time I’m afraid. I’ve a deal of none-woodwork related business to attend to and it will keep me busy for while. It might be a couple of weeks before the next installment. Take care my little babies. 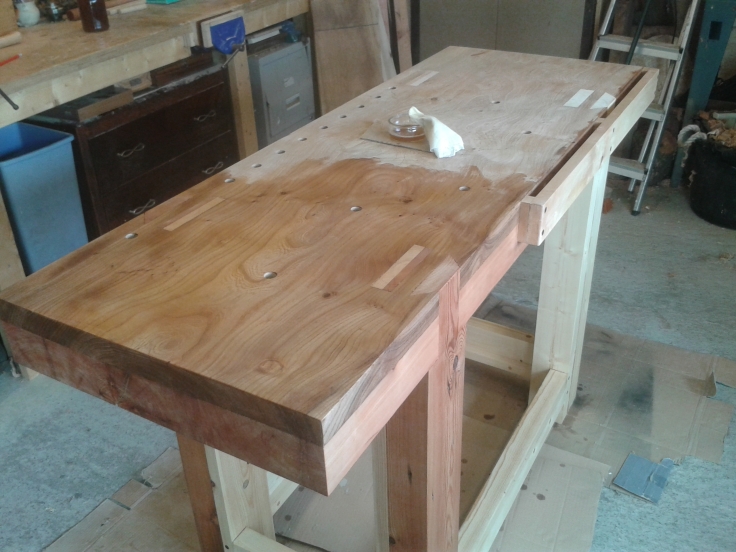